Why You Need a Team When Buying a Business Aircraft As published in BusinessAir 2018 issue #8

When some of you read this title you are thinking, we have done this before and hiring a team is just an added transaction expense.   We have internal counsel or a legal firm on retainer that does our other transactions or we have a firm that does our accounting.  Why do we need a specialist if our current firms do not have them on staff?

Aviation transactions have gotten more complicated every year.  While some would argue they do not need to be this complicated and 20 years ago they were far more simple, it does not change the reality of today.  Aircraft transactions have gotten more complicated because there have been cases that warrant making changes to what once were standard contracts that can add up to significant amounts of money if something goes wrong.

A couple of years ago, I had a lawyer put together a Letter of Intent (LOI).  I wanted to have one to secure a plane in case my client had not yet hired an aviation attorney.  It was done by a highly regarded aviation attorney.  I had used it a couple of times with the eventual attorneys we hired not having any issues.

Then, we were working with a client and they hired an attorney that I had worked with previously using the OEM form of LOI.  When he reviewed my LOI he said we needed to change a sentence.  I advised that sure we could do that, but I was curious as to why, since just 6 months ago it had passed with flying colors by both the buyer and sellers attorneys.  His answer is just one of several reasons to hire someone.  Three months earlier, there had been a court case involving a LOI with that same language and it ended up in a long drawn arbitration when the deal went south.

In my opinion, good aviation attorneys exist not to run up the bill, but to make sure that if there is an issue in the deal, that you are protected.  When dealing with millions of dollars it is cheap insurance.

The same goes for hiring an aviation tax expert.  This is even more critical with the new tax law as there are structure issues that you need to be careful about.  Finding out at the end of the year that by making a minor tweak to your structure you would not have lost all or a large portion of your tax deduction is not the right time.  An ounce of prediction can be worth a great deal of money.

When you hire a broker or acquisition person you are hiring them because they are a specialist.  It just makes sense to have your whole team be specialists in aviation.  If they are offering legal advice, they also should be licensed to give that advice.  Just like there are bad brokers, there are bad tax and legal advisors.  A little due diligence and you will find the right ones that are not deal breakers, but deal makers and ensure you are protected.  If all three do their job correctly, you will think the transaction was easy and that you could have done this without them.  That is when you know you had a good team.  And if it is a tough deal, you definitely will be thankful you had knowledge on your side. 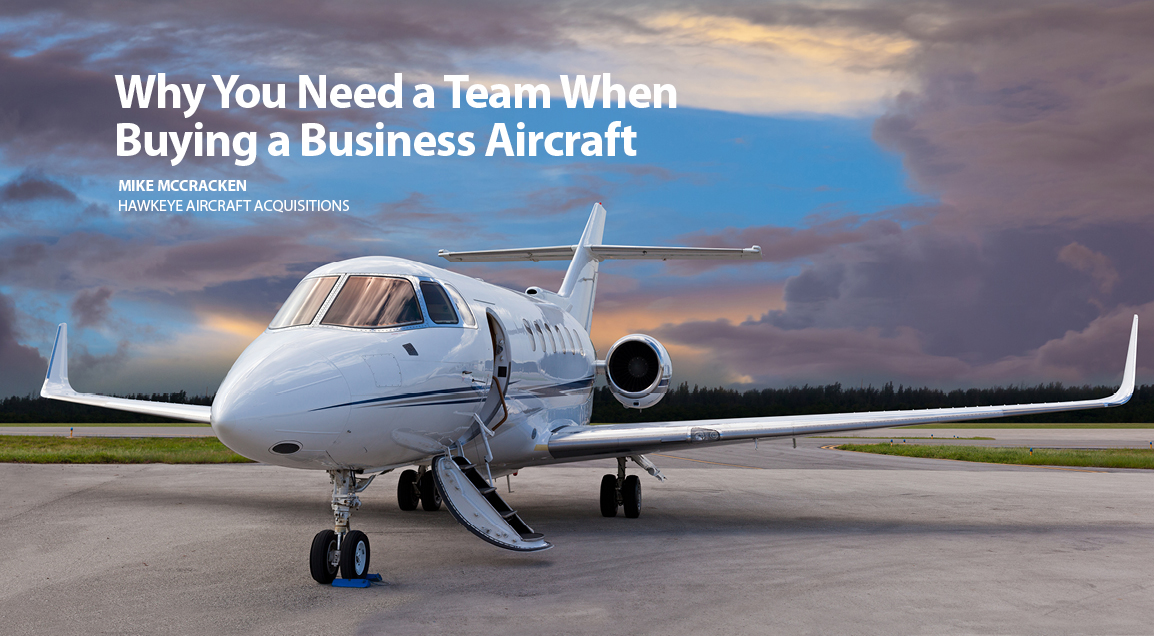 Article Name
Why You Need a Team When Buying a Business Aircraft
Description
Aircraft transactions are complicated. Hiring aviation experts can help you avoid costly mistakes. It isn't good business to try and save a minuscule amount of money by not hiring experts when a mistake can cost hundreds of thousands of dollars.
Author
Mike McCracken
Publisher Name
BusinessAir
Category: UncategorizedBy Mike McCrackenAugust 21, 2018

Why are you paying a broker for your aircraft purchase
February 24, 2021

Advice for Buying and Selling Aircraft
September 22, 2020
Selecting the right team to sell or buy an aircraft.
August 31, 2020

What is the aircraft market paradigm during the Covid 19 economy?
May 26, 2020

Pandemics and Flying Private, some talking points to consider.
May 26, 2020
Go to Top
X