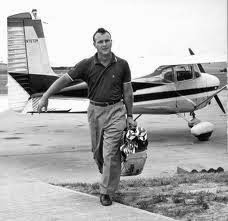 Arnold Palmer is often credited with being the first golf professional flying to tournaments in his own plane.  However, it was Johnny Bulla and a few golf pros who bought a war surplus C-47 to fly himself and fellow golfers to tournaments in the late 40’s.   One of the first time shares?!  This year at the Masters tournament the ramps will be filled with fractional aircraft dropping off golfers and fans as well as many personal aircraft.  Arnie’s original single engine Cessna would be dwarfed.
With the invention and popularity of the fractional ownership/time card models from NetJets, the combined Flight Options/Flexjet brand , Wheels UP plus several more specialty providers, private aviation is much more accessible to touring pros.   Just look at the number of these companies logos on golfers hats or shirts.  It allows them to travel to more events, spend time with family and pursue other interests.  Plus there are still a handful who have found, for their missions, owning their own plane is more cost effective.
Some would call it a luxury, others who spent over half of their life on the road would call it an investment in their personal life.  Think of Mickelson flying overnight so he would not miss his daughters 8th grade graduation.
Private aviation is sometimes criticized for being a toy of the rich and famous.  Whether for the business of golf or the running of a competitive business, the reality is, if it did not make people more productive it would not exist.  The bottom-line is the increased accessibility of traveling by private aircraft has made many more of the new generation of golfers be able to enjoy a career, have a family life and pursue business opportunities off the course.
The one universal truth is time.  It is finite and how efficiently we use it makes a difference in the journey of life.  How one measures the costs of time and convenience may be subject to discussion, however no one can argue the benefits.

Does Complying with the Aviation Alphabet Soup make you any SAFER?
September 10, 2015

Private Aviation versus Business Aviation–What is the Difference?
May 4, 2015

Why is the value of the corporate plane so subjective versus objective?
March 19, 2015
Go to Top
X